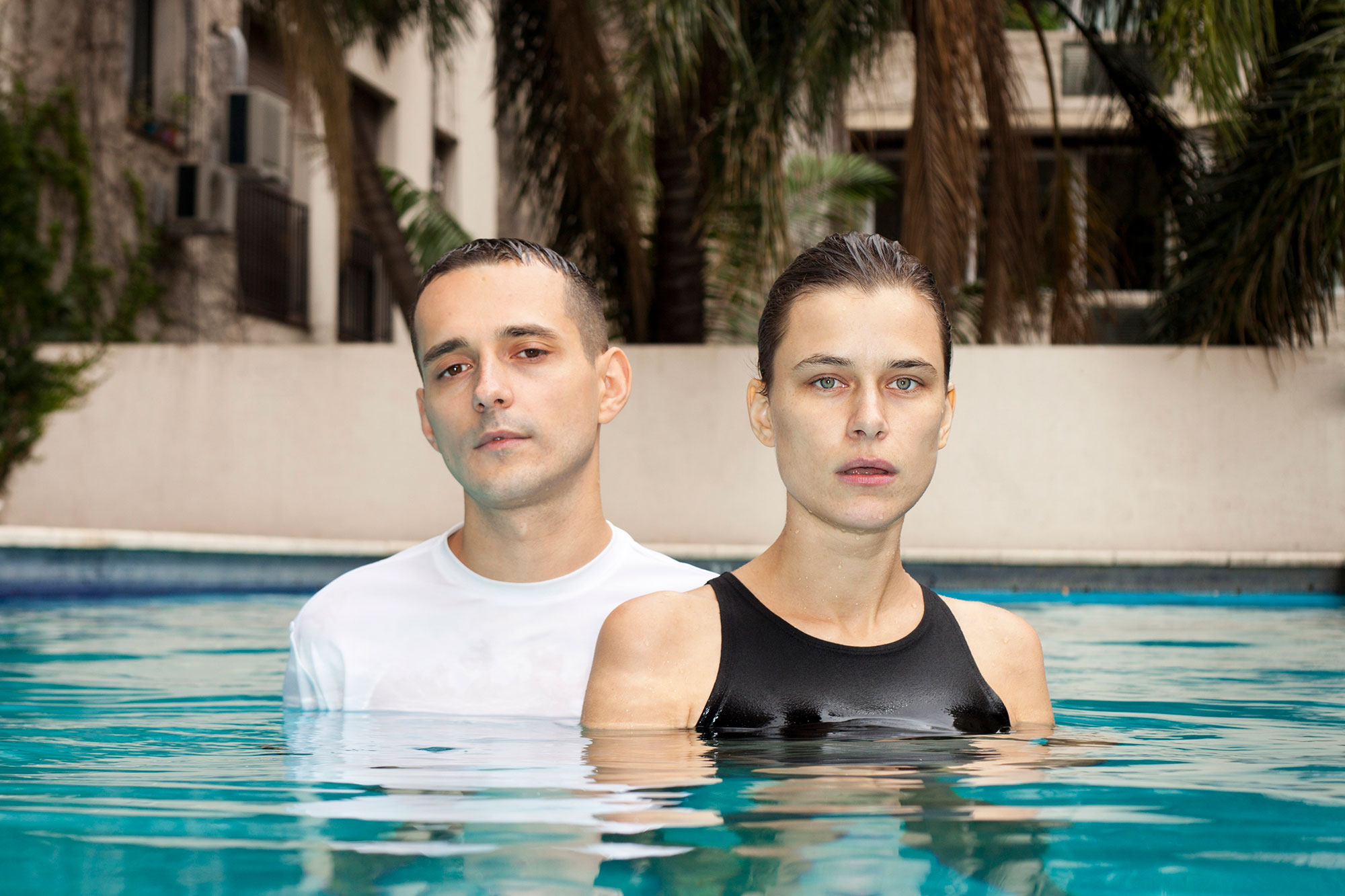 It is hard to pin down the essential element of the Berlin duo Easter. Their lyrics are notoriously surreal and explicit at the same, their videos are disturbingly capturing, they rarely play live shows and when they do, they make sure to blur the line between music performance and performance art. Not to mention their twin look and distinctive fashion choices. Even their music seems to have a certain aesthetics: Play any song and you’ll get a smooth electronic beat providing a backdrop for a freaky voice talk-singing about anything from alien babies, soy protein and fungi to hand jobs, recreational drugs and period pain. In line with the performative aspect of their work, their official page consists of a Tumblr Ask page where you can “ask them anything” and they actually answer.

It was a chance meeting that brought Stine Omar and Max Boss together, or maybe it was fate. The story has been told many times, but for those who haven’t heard it yet, it goes like this: Stine was walking through the Berlin district of Friedrichshain when she spotted Omar sitting at an Asian place eating noodles. Their eyes met. Stine walked into the bar next door but soon realised she doesn’t have time to hesitate. She left the drink untouched and went to the noodle place to ask Max the stranger if he’d hang out with her. Max the stranger said “ok” and they spent the next 14 hours wandering the city and drinking tea. Next day, Stine returned to back to Oslo, where she lived at the time, and Max to his hometown in western Germany.

They admit they were both a bit lost then, uncertain about their professional future. Through this chance meeting, two lost souls found a soulmate – and career path to follow. Their creative partnership started off as a long distance affair and the project continued to exist primarily online even after they both found themselves living in Berlin. The rarely play live. “Other bands tour to become known, for us it’s the internet.” The internet allows them to maintain greater influence on how their work comes across. “You can manipulate your self-concept,” Stine explains in a 2016 interview.

It is all the more rewarding when they go out there and play, for an Easter gig is much more of a performance than a music set. Not surprisingly, because their music is just one part of multimedia gesamtkunstwerk. They both studied fine art and have been making videos together before they started making music. Before Easter, they had a music project called Euroshit which consisted largely of a poster for their upcoming world tour. They actually produced a few songs under this moniker but never played a single live show and eventually changed the name to Easter (apparently it was Easter holiday when they met). The multimedia aspect of the project broadens their field of operation, it allows them to make use of various art platforms. They can perform anywhere from a music festival to an art gallery and this versatility they enjoy.

Stine mounts random associations onto surreal imaginations in her lyrics. Who else rhymes tequila with Shakira? Who else sings about ginseng and litchi, horseshoe crab, pearl tapioca and soft centered eggs? It wouldn’t be an Easter song if it didn’t mention random foodstuffs and/or bodily processes, or anything that is generally considered gross and therefore rarely inspire songwriting. Stine’s bizarre fantasies often turn out to be an accurate description of the lives we live, a witty comment on the relationships we have, struggles we go through, choices we make, identities we craft. “Sleep around is all ok but you must choose your wing,” Stine laments in the song Heterosexual as she “comes out” as one. On Rabbit, she describes a cow-girl’s monthly war with the “indians”: “I be bleeding like abortion when the indians kick in / but to fight their cruel attacks I be better off with gin”.

Max meanwhile provides smooth, electronic noise fabric that works perfectly with the texts and Stine’s delivery. Before Easter, he’s been producing his own tunes under the moniker Cyan Kid. They lack the surreal appeal Stine’s voice brings in, but they too are well worth a listen. Easter have been around for more than a decade now, during which they put out two albums Ur a Great Babe and The Softest Hard, and self-released a two-part EP New Cuisine. 2017 saw a release of a few singles but they have been silent since. I hope Omar and Stine have some more good stuff cooking up.