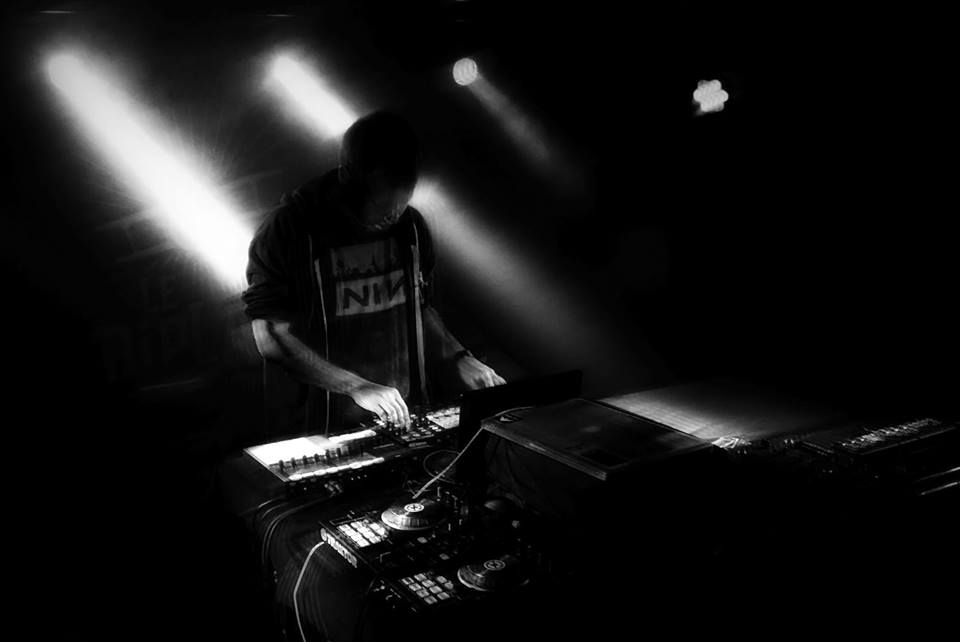 MACRONOISE: THE TRACK IS ABOUT THIS SORT OF CHILDISH
ATTACHMENT TO THE PLACE WHERE YOU WERE BORN

Meditative electronics soundscapes of the Slovak-born and currently Prague-based producer MacroNoise are often populated with disparate elements that fit surprisingly well, such as the child choir sampled from a scene of 1960 film on the latest track called Domovina (Homeland). In my head they sometimes evoke images of cells shuffling about on the microscope slide and because of their pronounced rhythm patterns they sound like some imaginary ancient rituals. The release of his new tracks and the video for it sparkled the idea of a short tour and it was in this matter that MacroNoise (real name Tomáš Šebesta) got in touch. Coincidentally, he was visiting Berlin soon after that and we met up in a cosy bar hiding behind unassuming darkened shop windows from the unrelenting rush of Warschauer Strasse. An interview turned into a long evening of lovely encounters as we picked up some other likeminded people on the way. It was 3AM by the time we said goodbye.

Coincidence as a creative force

There wasn’t too much I could find about his person in advance. “One could say I grew up as a rocker,” Tomáš says when asked about his musical background. “When I was a kid I had guitar lessons and drum lessons as well.” It was through drum’n’bass his musical journey took a turn towards electronics. He tells me he came across it at some point in high school. “That was the first electronic music genre that really got me. After a while I became over-saturated with its fast tempo and moved onto other genres, I started with trip hop artists like Portishead and similar and through them to I got to Apex Twin or Autechre.

From there it wasn’t too far to the type of music I’m making now.”

But there’s something in MacroNoise’s music which to me feels as very far away from the kind of coldness that fills repurposed industrial halls and touches the hearts of urban peoples with abrupt turns and glitches. Maybe it’s the rhythm that I perceived as natural on a very intuitive level. If I was to describe it I’d say organic electronics, there’s all sorts of different elements that for me evoke organic structures. “Often I try to sample something that’s typically Slovak or to combine live instruments with more aggressive electronic sounds” Tomáš explains. But it depends on the track, there is no recipe to follow. He admits that it is often coincidence which points a track in a certain direction.

“If we take Domovina as an example, that was conceived as an instrumental track originally. Then one day I was watching this old Slovak film from 1960 titled Interrupted song.” It’s a Soviet war film about Slovak soldiers in WWII fighting alongside Nazi troops against the Soviets, but many of them defected and joined the Red Army. “There’s a scene in the film where children at school sing the song and as I watched it I realised it fits rhythmically into what I’m working on at the moment. I even stopped the film, downloaded the sample and immediately tried it out. I had to change the key but otherwise it matched perfectly, so I used it. Usually it works like that.” Does he sometimes use live instruments? “I try to. Sometimes I write a song on the guitar and then I translate it into electronics, but mostly it’s just electronics.” His live performances are purely electronic though, using only a laptop and controllers. “Otherwise I’d need some bandmates, your options are limited if you’re alone onstage,” he notes.

Turns out the track relates to a  much smaller place than I imagined from the title. Maybe because living abroad one becomes accustomed to talking about countries not specific regions when asked about one’s place of birth. Only though the video and the use of traditional costume (called “kroj” in both Czech and Slovak language) my notion shifted. Tomáš reveals the “kroj” worn in the video is authentic. “That’s the traditional costume of my grandfather from the 1950s. But to tell the truth I don’t really have a direct connection to folklore, we used it more as a prop in the video. It’s definitely about a specific region, not that much Slovakia as a whole. It’s about home without any further geopolitical implications, it’s mainly about my place of birth and the emotional connection I have to it, childish even. That’s where I used to go when I was a kid and I have beautiful memories of that.”

I’m asking if it has to do with the fact he’s been living in the Czech Republic for several years now and Tomáš says it doesn’t, the main point lies somewhere else. “It’s the contrast between life in a major city and life in a small town. The fact that I live in the Czech Republic has little to do with it, I imagine I’d feel the same if I lived in Bratislava. It’s the pace of life in a city. I like the music scene in Berlin and I can imagine moving here, that it’s a different country with different language is irrelevant. The track is about a sort of childish anchorage, attachment to the place where you were born. I will probably be drawn to it and coming back for as long as I live.”
How does he the experimental electronic scene in the Czech Republic and Slovakia? “Positively, for sure. There’s all sorts of cultural venues and spaces cropping up, such as Záhrada (The Garden) in Banská Bystrica. There is enough places for musicians to present themselves and become a part of a community, I think the scene is thriving at the moment. There’s various festivals as well. And I’d say that promoters are quite supportive, open to booking young musicians. I will be playing at the festival in Boskovice this summer, that’s in a region where I’m hardly well known but they booked me anyway. From my experience, musicians have options, in both Czech republic and Slovakia. Also the experience of organising the tour was very positive. We approached people in Brno and Bratislava, where we didn’t have a direct connection, and we were able to play shows there. They must’ve seen there’s something in us, there’s some potential.”

It was a slow process put into motion by a series of coincidences, one could say, which eventually led to the tour with the singer and producer Awali and the band Gwerkova: “I liked the track with the vocals and so I approached Patrícia if she wanted to make a video clip. It started with the video, I was thinking to make a small concert with a screening in the Central Slovakia. At about the same time I was considering to invite someone to remix the track. The idea evolved further, I thought Illl and Gwerkova could perform at the screening in Slovakia and Awali at the one in Prague. It was the guys behind the festival Guča umenia who suggested bringing Awali to Slovakia and Gwerkova to Prague. It was a step by step process though, the team around Guča festival helped me a lot. I wouldn’t be organising a show in Prague by myself but since it worked with them we tried elsewhere.”

In the short film by Patrícia Gyenesová, a young man in a traditional folk costume moves through a nature landscape. At one point he’s seen ripping a plant with roots from the ground. I wanted to know how did Tomáš choose to direct the video Patrícia and to what extent she’s been given some instructions. “She studied art in Banská Bystrica, at the school that a few of my friends went to, and it was through them that she was recommended to me. So I got in touch with her and she said yes. I gave her some notes explaining the background of the track – that I’m originally from a small town and life in Prague seems to me a little too hectic and stressful, Tomáš explains. “She took this notion and turned it into the video really well, in my opinion,” he adds and I couldn’t agree more. The highly atmospheric video elevates the track to a new level. “With her as well it was a very slow process. I traced back our email conversation recently to see when did we start and it was at the end of May last year, which means that we took ten months to complete the clip. We didn’t push anyone, we let everyone involved to do as it suits them and as time allows, because there’s not much money in it.”

What surely played a role is that Patrícia and Tomáš share the same homeland. “She’s from Prieviedza in Central Slovakia and the video was shot not far from there, in a village named Kanianka.” Central Slovakia is the main topic of the song and it is the region that Tomáš will always be drawn to. “It is definitely Central Slovakia, the town of Zvolen and around there. The vocals from the film, when I first heard them, reminded me of the region where my grandparents come from. That’s the kind of place where you have your house and the next neighbour is hundred meters away. That’s something I can hardly describe. I used to go there always in the summer and something from that kind of life I carry with me to this day.”