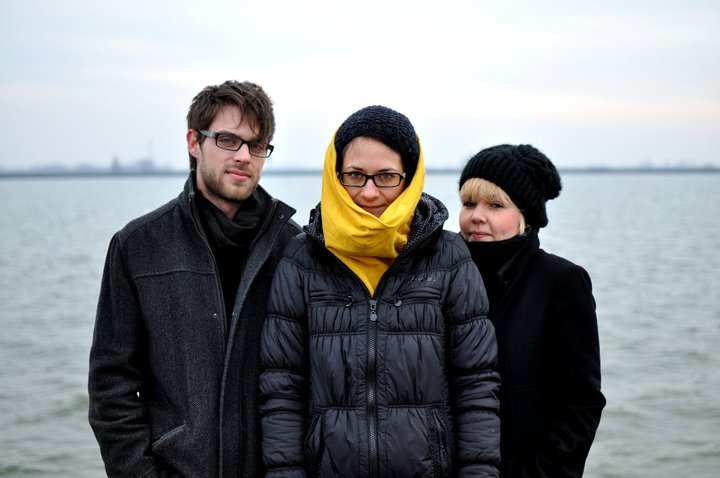 GWERKOVA: IT’S IMPORTANT TO KEEP MAKING MUSIC AND TO KEEP IT CLEAN

Enchanting female vocal inhabits a delicate landscape of gentle guitar and ethereal electronic sounds that mostly soothe and sometimes prickle a little bit. It’s a place far away from the rush and chaos that shape our daily lives, a quiet retreat on the edge of time and space where everything floats like a jellyfish in the deepest ocean blue. As does the painting on the cover of their 2015 album Safari, the music of the Slovak band Gwerkova radiates a specific kind of warmth and glows some sort of transcendental energies – I always thought the cover art to be extremely fitting.

The project started with two friends sharing a flat on Gwerkova street in Bratislava collecting musical ideas and writing songs together. The girls had little intentions of having anyone else join this endeavour but then they met Jani – who knew his ways with electronic sounds – and it all clicked. The trio quietly stormed the Slovak music scene gaining a decent fanbase and a strong critical acclaim with every release, but instead of pushing it they always fell quiet for a few years in between retreating to their private lives. Last time they let themselves heard was with the single White Lies back in 2017 which left the fans hungry for more. Now it seems that something is happening – Gwerkova accepted MacroNoise’s invitation to tour along with him, Awali and Illl (Jani’s solo project) and the promise of new songs is the spring air.

I had a lovely chat with the guitarist Zsuszi about the band’s history which meanwhile spans over a decade (they first started in 2008), keeping far away from the main-stream, environmental concerns and the upcoming tour.

Not unlike your music, it seems to me Gwerkova is a living organism quietly floating through time and space. That’s quite a rare form of existence in this day and age when everyone seems compelled to demand everyone else’s attention all the time. Meanwhile, the band has reached the ten-year milestone, how do you guys feel about that? How do you reflect on the past decade?

Ten years in the same band with the same band members is very similar to seven years in a marriage with the same person. All movements are well-known, all stories have been told, all laughs and cries have been shared. What will the future bring to us? Next level of our shared music adventure, or some crisis coming from the depths? We do not know yet. Only one thing is certain: we would like to keep on making music. The issue for Gwerkova is time scheduling. While one of us is busy being an orthopaedic surgeon and the most active environmental activist in our district, the second one is a father of one sweet girl and one sweet boy, and he is a working-class hero and a sound engineer at the same time. The third band member is a mother of two sweet boys and a working-class shero on parental leave. Although our professions are already set, it is extremely important for us to keep making our music, and to keep it clean. I mean clean from mainstream marketing and strategies, or any ‘todos’ that music industry pushes through the sausage machine. We do not want to spam our music on social platforms either. Our only strategy as a band is that we never wanted to flow with the main-stream, not in the beginning and not even today.

Otherwise, we are happy to be a ten years old band carrying in-and outland gigs, two LPs, one EP, one single and a Radiohead Award (Slovak music award) for the best LP. And then one lead singer – Gaspi, one sound engineer who is creating synth/drum/melodies/programming – Jani, one guitarist – Zsuzsi, one new backing vocalist gal – Andi, one more sound engineer who takes care of our sound during live shows – Mario, and one VJ – Kalmi – whose visual ideas and projections are terrific.

Gwerkova started with you and Gaspi making music together “for the purpose of self-entertainment”, the two of you were collecting musical ideas that weren’t suitable for your other projects (or so your bio says). I supposed we can agree that you achieved more than that, was it when you decided to team up with Jani that the band took a bit more serious turn?

Gaspi and I used to play in a band since we were 16 years old. That was a long time ago! When Gwerkova as a project started to outline, we were renting a flat together at Gwerkova street in Bratislava. Any melody that hit our brain, we sat together with a Spanish guitar and made it into a song. However, yeah, definitely, Jani’s sense and knowledge took the music of Gwerkova to the next level. I always thought he has a sixth sense, he feels the aura of the sounds/music, and more than that. I remember the early years when Gaspi created some basic electronic arranges, and she was sweating a lot with them! Then we met Jani, and YEP! That was it! We’ve had wonderful rehearsals, different ones to what we used to have before. We were discovering the other side of our music at that time. Gaspi’s voice and the way how she was singing, and the topics she picked up and turned into lyrics (Biosphere, Meet you at 5. a. m., Picea pungens glauca globosa) were absolutely interweaving with the music. We had no doubts that we will continue with Jani on the road of our music adventures. I hope you can still feel this resonation during our gigs! 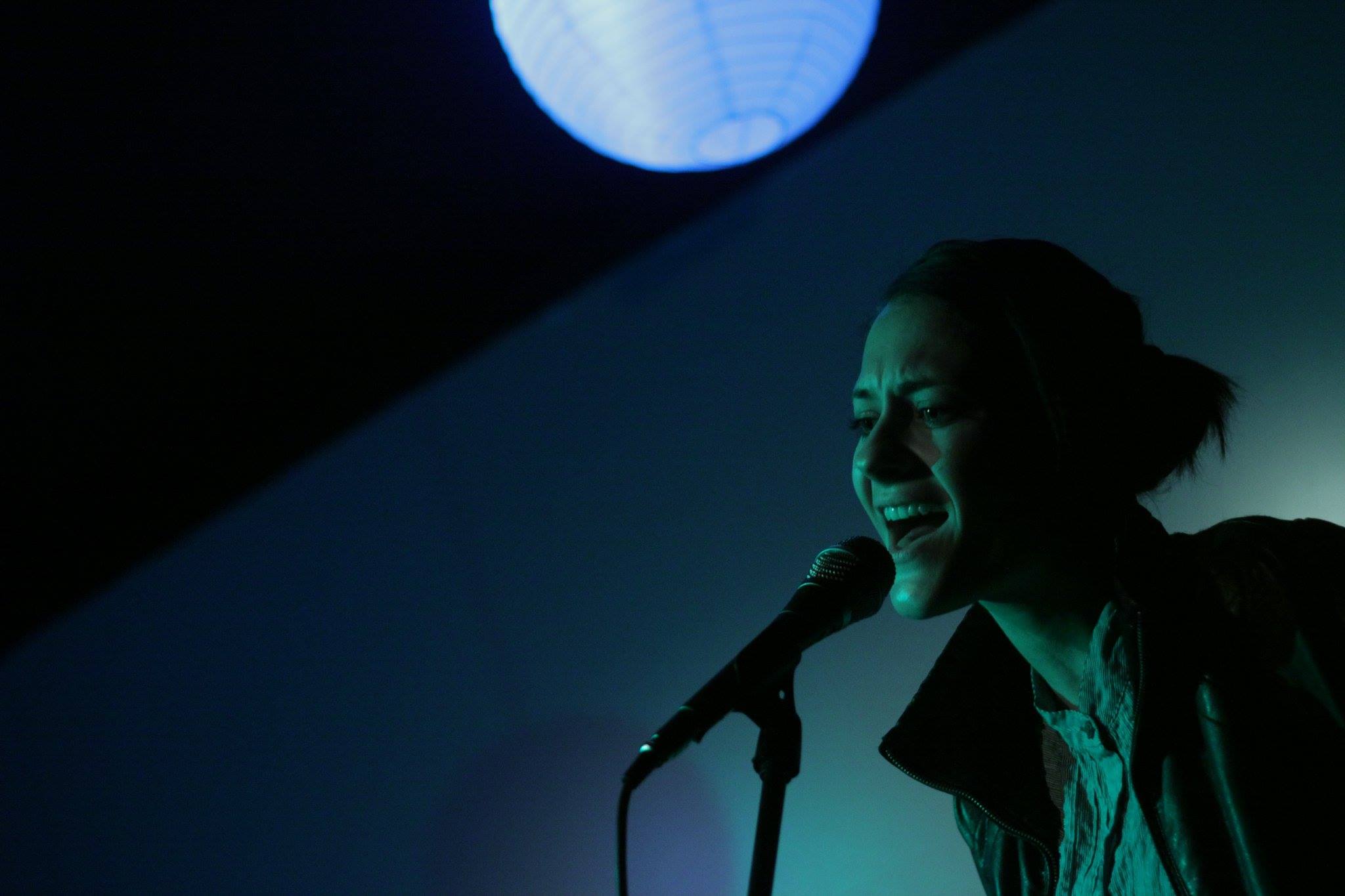 Your album Nada will be 8 years old this year and the Safari is turning four. Has Gwerkova been active – in the sense of rehearsing and working on new material – throughout this whole time or were there some dormant periods? In 2017 you teased us with the single White Lies, is there anything else on the horizon that we can look forward to?

We’ve been quiet for a while, right after we won the Radiohead prize for album of the year with Nada in 2011. The reason was: we’ve got all the recognition we wanted, and we have disappeared. That was a joke, of course. Gaspi’s daily work turned into a more serious pace, and she needed to take more time off from practising. Jani became a father, so his time schedule dropped too. I spent some time in the UK for work, so lady Gwerkova hibernated for a little while. We’ve never disconnected ourselves from each other, and a little bit later we decided to continue. Lady Gwerkova woke up from her icy dream and another LP, Safari was born. Then we issued the single White lies too. On our horizon is some new stuff, more crunchy and fresh songs, and these we will play for the first time live on tour with MacroNoise and Awali. So, be aware!

That’s my next question. You’re going on a short tour with three solo projects – the Czech-Ukrainian singer and producer Awali, the Slovak-born Prague-based producer MacroNoise and the producer Illl who is a member of Gwerkova. The connection is thus clear but still, how did it come about that Gwerkova will join the tour? Are you looking forward to being back on tour?

Tomas (aka MacroNoise) offered Jani’s solo project (aka Illl) the opportunity to play some live shows together in April and in May 2019. Tomas was aware of Jani’s band Gwerkova too, so the offer was extended to us as well. We said yes, and we did it gladly. Thank you very much Tomas, and not only for the opportunity. The organizational stuff around is also superb managed. We can’t wait to be on this tour! JICHAAA!

The occasion of the tour is the release of MacroNoise’s track Domovina (Homeland) and its remixes by Illl and Awali. What does homeland mean to you personally?

To me is where I feel safe, comfortable and free, and where I would like to return from long journeys and be buried when the time comes.

There is a deep connection to nature seething through your music, there are very many references to animals and to the environment scattered across your songs. Where is that coming from? Is that a topic that you guys are consciously bringing forward or is that merely subconscious, a theme that is close to all of you and simply comes out in the creative process?

I think this is more about Gaspi’s inner world. She is creating a kind of legacy with her lyrics. Our songs are not really about being lovesick or about next rendezvous. Gaspi’s aim is to explain, to reflect and to make listeners think about the issues that are affecting all of us on the global or local level. We are, together with Jani, partners to her in this when making music.

Your song Biosphere has always resonated very strongly with me, the combination of ethereal sound and powerful message works really well. Released back in 2010, it is sadly as relevant as ever today. Listening to it recently, it struck me that there doesn’t seem to be that much environmental activism in music (compared to visual arts where it is quite prominent) and it rarely takes the form of concrete songs (or albums). Biosphere is to me an example of a clear song-statement despite its general subtleness, maybe the most obvious one would be ANOHNI’s 4 DEGREES. On the other hand, Grimes recently announced her new album Miss_Antrop0cene will be so maybe more will follow… What are your thoughts on this?

Well, I know a bunch of musicians who are obsessed with being environmentally active in the punk/hardcore scene. It is also true that I have not heard any pop song (except Jacko’s Earth song) about saving our planet or recycling. But there are also very positive examples, like the festival we adored so much with Gaspi several years ago, FLUFFfest. Besides music, it was one of our schools to learn what is going on in the industry sectors, what is the animal holocaust, why it is so important to be a passive customer, to be vegetarian/vegan, to recycle, to upcycle etc.

However, the statistics are very depressive, saying just a little has been changed in a good way. Despite the fact that more and more people are aware of recycling, just a few of them are really doing it. On the other hand, hallelujah to the persons, thinkers, like Tom Szaky, the CEO of Terracycle and Loop company, who are able to rethink the idea of waste. If Loop company succeeds with his plan, to change the packaging line from linear to circular, that will be a huge thing to the planet Earth!

Regarding Grimes: I think I would be very impressed and motivated too if Elon Musk would be dating me! Just joking. She is doing the right thing. To be green, to spread the philosophy of being green is the way we all should follow, and not just with songwriting.

I stumbled upon a 2011 interview which was titled: “We don’t have any plans”. Do you have any now or are you gonna simply continue to float?

Pssst… It is a secret!