DUDEY: THERE IS SOMETHING VERY SPECIAL BREWING HERE

Dudey is a singer, composer and producer based in the Georgian capital Tbilisi. Though she sees herself (and rightly so) rooted in the club music scene which is currently in full bloom, her roots go further back into alternative rock that she grew up listening to. Or as she puts it in her bio, she “manages to synthesize house music with gothic-influenced songwriting”. Who would say no to that?

She’s ready to conquer the world, anyway. You can sense she’s bursting with both creative ideas and energy – importantly, she also has enough discipline to see her ideas become reality. When I reached out to her for the article on the music scene Tbilisi, she got back to me immediately – providing so much information in such a neat manner it would be a waste to not publish it.

Can you tell me more about our project and your plans for the future?

My music background is very different from what I’m doing now. It was a long, long road that I had to walk to get where I am now. It all began when I fell in love with music as a kid. However, it just happened that it wasn’t exactly supported by my family. You have to understand, I’m a 90’s kid, after the collapse of Soviet Union my family went through hell, just like the rest of the country and back then very few people from older generations took music seriously. Plus in Georgia usually at least one member of the family either plays an instrument or sings, so, you know, it’s not exactly viewed as something special. And it sure as hell wasn’t viewed as a possible future career choice. So I was told that I have neither an ear for music nor a singing voice and I believed that for a while (secretly hoping that one day maybe those skills could be developed).

Later, as a teenager I pretty much bugged the living hell out of my grandpa, so he finally bought me an acoustic guitar and, after learning a couple of chords, I started composing my own songs. I grew up listening to alternative rock and metal, so I always thought that if I were to ever get up on a big stage, I’d probably have a band behind me. But after doing several acoustic/rock/experimental projects with other people one thing became very clear: I didn’t want to be dependent on anyone. The problem was that I didn’t know how to achieve that. I could sing, play guitar and bass and compose stuff, but that was it and it certainly wasn’t enough.

It was a very dark time for me but that’s when electronic music saved me: I discovered that magical world completely by accident and was amazed at how well it fit my needs. Now all I had to do was to dive headfirst into a completely foreign ocean and build my skill set as a producer… so that’s what I did. No matter the genre, I never wrote happy music. For me music is therapy and I wanted to translate the same emotions that I’d express using 6 strings to an electronic track, that’s how I came up with an idea of keeping live vocals. I wanted people to dance and feel something at the same time, but not in the way that would mess up the whole vibe. It’s kind of like walking a thin line between escapism and self-awareness. Something like “yeah, shit happened, it is what it is but, hey, tomorrow is another day”.

My plans for the future are as great as you can only imagine. I am an absolute believer that your dreams should scare the living daylights out of you, otherwise, they’re not big enough. I’m working on my new album now and can’t wait to reveal it to people and once that’s done finally get back to playing live locally and internationally, to build my career step by step until my name is the thing that comes to your mind when you hear words “electronic music”. 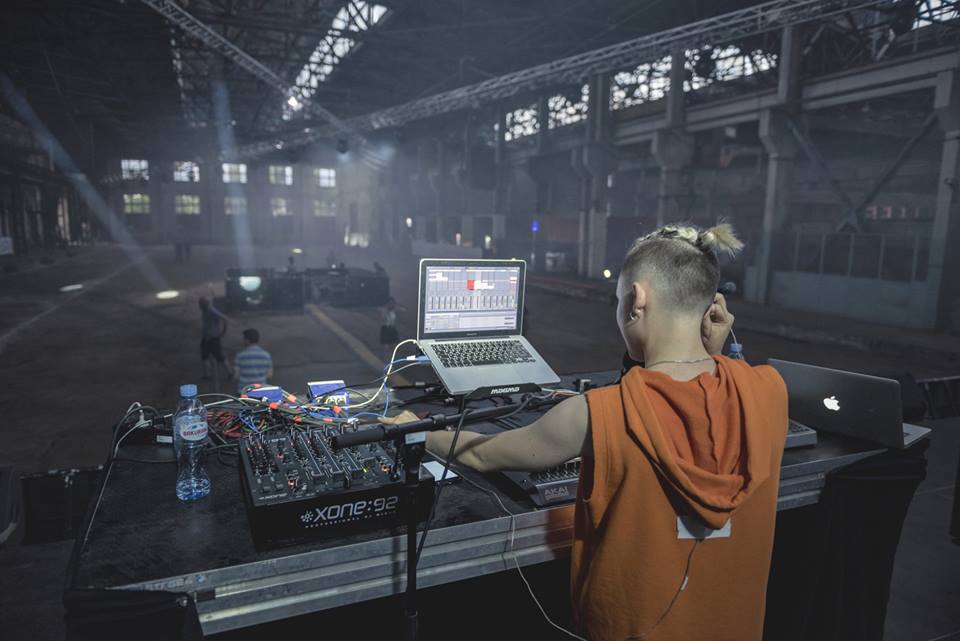 How do you see the (independent) music scene in Georgia?

The music scene, in general, is fantastic but I belong to the electronic, “dancing” part of it, so I will be speaking more about that since that’s what I know. The local scene is absolutely booming with talent that’s searching for an outlet. Anyone who pays any attention will see that there’s something very special brewing here. I feel very honored to be a part of it, especially now, when it’s still very honest, there are so many things happening and so many artists are getting better and better with every passing day. I think that the music that’s being made in Georgia has a very authentic melancholic, bitter-sweet vibe to it. Yes, people, in general, are very sensitive about their sadness – that’s why melancholy sells and some artists fake it, but not us. We can’t lie – it is what it is, it’s the reality that we live in and our music reflects it. If you ever wander in the streets of Tbilisi, with local artists music playing in your headphones, you will easily understand what I’m talking about. Our artists are great and our listeners and dancers are out of this world. Ask any DJ about the Georgian crowd and they will tell you that they’ve been blown away. Georgians are skeptical towards new names and faces but they can always spot and appreciate good music and a quality product. I am very proud to be representing this culture everywhere I go.

Is it hard for Georgian musicians to find audience abroad?

In this day and age, I honestly don’t think it’s hard for anyone to reach out to a foreign audience, at least not online. You’ve got the whole world underneath your fingertips, all you need to do is upload a track and if it’s really good the word will spread around. Yes, the competition is crazy but that’s how you get better, that’s how you keep out the part-timers. It was never supposed to be easy – I believe that people need to treat their profession like a craft, and one day the success will come. Booking gigs abroad, however, is a different animal and I think it’s more challenging for us since there are not that many promoters and booking agencies here. In general, the music industry as such is practically non-existent here but hopefully, this will change soon. Especially since the voice of Georgian artists is getting louder and louder each day, we’re starting to make a name for ourselves and more and more people get an idea of what we stand for and the quality of music that we deliver.